Professor and Chair of Chemistry 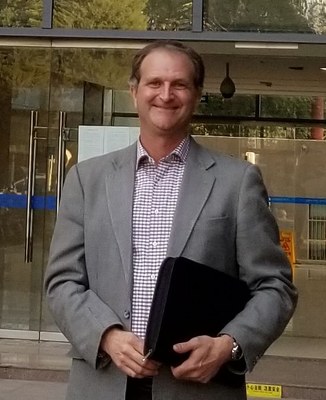 Craig Grapperhaus received his  Ph.D. in 1998 from Texas A&M University under the direction of Marcetta Darensbourg. From 1998 to 2000, Dr. Grapperhaus was an Alexander von Humboldt Fellow at the Max Planck Institute for Bioinorganic Chemistry with Karl Wieghardt in Mülheim, Germany. He joined the chemistry faculty at the University of Louisville (UofL) in 2000, was promoted with tenure to associate professor in 2006, and promoted to full professor in 2011. Dr. Grapperhaus served as the Director of Graduate Studies in the Chemistry from 2005 to 2010, the Chemistry Department Vice Chair from 2009 to 2012 and 2015 to 2017, and the Chemistry Department Chair from 2017 to 2020. Notable awards and other recognitions include:

Professor Grapperhaus collaborates extensively with his UofL colleagues including Professors Robert Buchanan and Pawel Kozlowski and Dr. Mark Mashuta and in the Chemistry Department, Prof. Gautam Gupta in the Department of Chemical Engineering, Drs. Joshua Spurgeon and Thad Druffel in the Conn Center for Renewable Energy Research, and Prof. Paula Bates and Dr. Sarah Andres in the Medical School. In 2013, Prof. Grapperhaus took sabbatical at the Regenerative Medicine Research Center of West China Hospital, Sichuan University in Chengdu, China. In 2020, he took sabbatical at the Conn Center for Renewable Energy Research in the J.B. Speed School of Engineering at the University of Louisville.