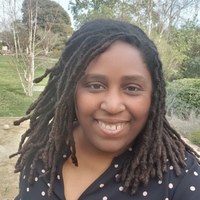 Dr. Michelle Grue’s interdisciplinary research in Education and Writing Studies draws on Black feminism to investigate diversity issues in academia and in digital writing. Her current project focuses on the official structures that do/not exist in Writing and Rhetoric doctoral programs to teach graduate students how to research race and gender in Writing Studies. Dr. Grue earned her Ph.D. at the Gevirtz Graduate School of Education at the University of California, Santa Barbara, and she joined the faculty at UCSB in the Fall of 2020 as an Assistant Teaching Professor.

Dr. Grue has given talks and led workshops both nationally and internationally on the topic of diversifying and decolonizing the curriculum. She draws on her research of Writing Studies organizations' presence in both digital and physical environments to render complex feedback that both encourages positive growth evident in those organizations, yet also shines a light on significant issues related to unexamined White privilege and anti-Black racism. Follow her on Twitter @mnpgrue.

Presentation: "#TheFeministsAreComing: But Are They Anti-Racist?"

Description: Calls for anti-racism in Writing Studies (NCTE/CCCC Black Linguistic Justice Demands, Inoue’s CCCC address, etc.) can feel overwhelming for several reasons, in part because of the often unpaid labor of conference organization and the lack of a clear model of what an anti-racist conference space, physical or digital, would look like. In this talk and in the handout attendees receive, I use a specific Writing Studies organization -  The Coalition of Feminist Scholars in the History of Rhetoric and Composition - as an example of both positive efforts they make in their intersectional feminism in digital spaces, but also the valuable critiques of their in-person conferences and the varied ways the organization has, over time, responded to those criticisms. By using this particular group as a focus, I am able to take generalized anti-racist Writing Studies calls and show how they can be applied in specifics to a particular organization.

Despite saying on the Coalition’s website and enacting in their social media spaces that they “welcome and sustain all who do feminist work, inclusive of all genders, sexualities, races, classes, nationalities, religions, abilities, and other identities, in their research and classrooms” more work needs to be done in their physical publics. Critiques of the Coalition include the defensiveness and exclusion held at the town hall hosted at the 2019 Feminisms and Rhetorics conference, accessibility concerns questioned and critiqued as an expense, the overwhelming whiteness and white feminism of the conference, and the trappings of glorified slavery at the conference location. The Coalition has not ignored its critiques. As noted on the Coalition’s website, they have canceled the 2021 Feminism and Rhetorics conference both out of the COVID-related issues with travel and the ongoing conversations about the future of the conference. One hopes that, with the extra time between now and the next conference in 2023, the Coalition will use the digital conference alternatives it has planned to deliver for the interim to “characterize the world in which it attempts to circulate, projecting for that world a concrete and livable shape” (Warner, 2002, p. 81).

This talk (and the handout that will be distributed along with it) will outline ways to meet the concerns lobbied against the Coalition, but also highlight positive moves taken by other Writing Studies organizations for conferences and conference-like gatherings, such as the Naylor Symposium and Digital Black Lit and Composition (DBLAC), namely their intentional and substantive looping in and support of Black and other people of color in their event communities and their structural inclusion of graduate students and scholars of color. By both addressing critiques and spotlighting moves in an anti-racist direction, I hope attendees of my talk will be better equipped to engage in interactive anti-racist conference work, growing and changing such that they are more inclusive and more intersectional over time and in all their spaces.