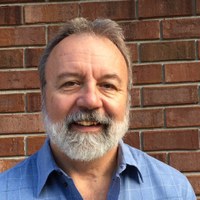 Michael Pemberton, a white male with a trimmed grey beard, in front of a brick wall.

Dr. Michael A. Pemberton is Professor of Writing and Linguistics at Georgia Southern University and director of the University Writing Center. A past president of the International Writing Centers Association, he edited the journal Across the Disciplines (2005 – 2020), and is Series Editor of Across the Disciplines Books. Currently, he is Co-Director of the CWPA Consultant Evaluator Service, the Associate Publisher for Scholarly Journals at the WAC Clearinghouse, and has been Co-Chair of the CCCC Social Justice at the Convention (SJAC) Committee since 2018. Much of the scholarly work he has produced and published during his 30-year career has been focused on ethical issues in writing instruction including, most recently, Labored: The State(ment) and Future of Work in Composition (Parlor Press, 2017) and “Writing Center Ethics and the Problem of ‘The Good’” (Utah State UP, 2020).