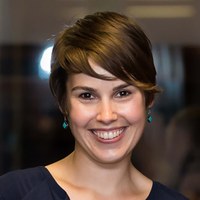 Dr. Maria Novotny (she/her/hers) is an Assistant Professor of English at the University of Wisconsin-Milwaukee, where she teaches in the Rhetoric, Professional Writing, and Community Engagement graduate program. Her research draws on cultural and feminist rhetorics to learn how reproductive health patients advocate for their version of health care. While this work has been formally published in journals such as Reflections, Rhetoric Review, and Peitho, her scholarship is also connected to her community organization The ART of Infertility. As a community-engaged scholar, she repurposes her research findings into rhetorically curated exhibits as a form of public pedagogy. Her latest project is a co-authored manuscript that expands on and defines ‘care’ as a research practice, demonstrates the efficacy of a care-centered research paradigm, and delivers concrete models for how to enact care methodologically. She joined the CCCC Social Justice at the Convention (SJAC) Committee in 2019 in tandem with her role as the Local Arrangements Chair for the Milwaukee CCCC 2020 Conference. Committed to creating “on-the-ground” social justice support for national disciplinary conferences like CCCC, she is continuing this work as a newly elected member of the CCCC Executive Committee. Follow her on Twitter @mariatnovotny.