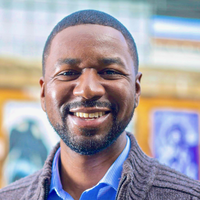 Dr. Marcus Croom uses research and experience to support the development of racial literacies from the post-White orientation. He has published in Black History Bulletin, Journal of Literacy Research, Journal of Negro Education, Urban Education, and has presented at a number of scholarly and public venues. Additionally, Dr. Croom has provided consultation for the University of Chicago Urban Labs and local school districts in Illinois. Follow him on Twitter @MarcusCroom, Instagram @IamMarcusCroom, and Facebook @IamMarcusCroom.

Workshop: "Conferencing toward Racial Literacies from the Post-White Orientation"

Description: In response to the Watson 2021 call for consultation and conference theme, “Toward the Antiracist Conference: Reckoning with the Past, Reimagining the Present,” this 90-minute workshop will challenge participants to racially reorient themselves, personally and professionally. Dr. Marcus Croom will introduce the post-White orientation and offer a template that conference designers can use to support the development of racial literacies through de/reconstructing the priorities and practices of their conference gatherings. Conference designers will understand how to begin using practice of race theory (PRT) to explicitly engage in healthier ways of thinking and doing race and, in turn, begin to design conference opportunities for their conference participants to also develop racial literacies.

Thus, it is easy to see that scientific definition of race is impossible; it is easy to prove that physical characteristics are not so inherited as to make it possible to divide the world into races; that ability is the monopoly of no known aristocracy; that the possibilities of human development cannot be circumscribed by color, nationality, or any conceivable definition of race; [and yet] all this has nothing to do with the plain fact that throughout the world today organized groups of men by monopoly of economic and physical power, legal enactment and intellectual training are limiting with determination and unflagging zeal the development of other groups; and that the concentration particularly of economic power today puts the majority of mankind into a slavery to the rest. (Du Bois, 1940, p. 137)

In other words, 1) the common sense view of race is false (Croom, 2020a); 2) despite the inaccuracy of the biological theory of race, the “plain fact” is that race is real in human history and experience; 3) warranted is an alternative theorization that demystifies race and more accurately accounts for race in human history and experience; and 4) the ongoing fact of consequential human racialization calls for racial literacies, that is, race critical “ways of thinking and doing that support human well-being amid the various processes that racially situate our lives, and some of these race practices and racial experiences are violence and trauma(tic)” (Croom, Flores, Kamberelis, 2019, p. 17).

Western European and American customs of race practice are routinely oriented by the baseless and morally bankrupt notion of racially White superiority, and anti-Blackness in particular. Thus, the vindicationist tradition and the post-White orientation names and counters this antihuman, deficiency philosophy which continues to be uncritically generated and perpetuated (including European Science and European Critical Theory) through various forms of race practice (Croom, 2020b; Hoover, 1990). When race is defined as “consequential social practice,” this means that our racial past and racial present need not be our racial future (Croom, 2020c). That is, we can think and do race for good rather than ill. Race critical conference designs are avenues that can support the development of racial literacies and accelerate the realization of a post-White racial future in the U.S. and perhaps other Westernized contexts as well.