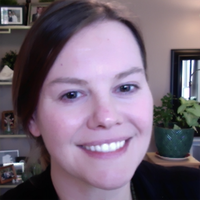 Heather Brook Adams, a white woman who is here pictured in her office.

Dr. Heather Brook Adams is assistant professor in the Department of English and cross-appointed faculty in the Women’s, Gender, and Sexuality Studies Department at the University of North Carolina Greensboro. She has been involved with the Coalition of Feminist Scholars in the History of Rhetoric and Composition since graduate school and is a relatively new member of the Coalition’s Advisory Board. Heather’s experiences are shaped by her work in community organizing, her non-academic experiences in the non-profit sector, and her academic interests.

Wendy Sharer: Wrap-up and Q&A
The session will conclude with a brief discussion of how the work of these three task forces--the Workflow, Processes, and Formats task force; the Graduate Student Outreach task force; and the Shared Values task force--highlight the multiple, complex, intersecting roles that organizations, institutions, and conference programming play in fostering and/or limiting the inclusivity and accessibility of a conference. Time will be provided for questions and conversation among attendees.