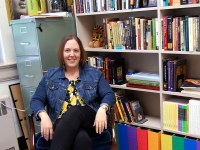 Prof. Jennifer Westerfeld researches ancient Egyptian history, a time when Romans ruled Egypt and Christianity was flourishing. But just because she studies ancient Egypt, that doesn’t mean she’d want to live there.

In this Q&A, we learn what Prof. Westerfeld would like to achieve as a teacher, and that it might be fun to travel back in time, as long as you’re not stuck doing manual labor.

My research deals with Egypt in the period after the pharaohs, when the country was under Roman control and in the process of converting to Christianity. The central question that drives my work is this: what did Egypt's Christian communities think about their country's earlier monuments? Nowadays we tend to see things like the Great Pyramid and the Sphinx as tourist attractions and symbols of Egypt's national identity, but what value did they have in early Christian times?

My current book project deals with this question by looking at a very specific angle – Christian interpretations of the hieroglyphic inscriptions that often covered the pharaonic monuments. By the time Egypt had largely converted to Christianity, genuine knowledge of how to read hieroglyphs had been lost, but we find accounts of Christian monks and bishops who claimed that they could read the ancient inscriptions, and so I'm looking at the stories Christians told about hieroglyphs (and the fake translations they sometimes came up with!).

What are the goals you most want to accomplish in your work?

Not so much the goals that are in your job description, but the goals you hold personally? The main thing that I want to accomplish in my teaching is to give students a sense of history as a dynamic, ever-changing process of interpretation, rather than a static set of names and dates that they have to memorize.

One of the things I always try to do in my classes is to destabilize the notion that the textbook is always right, so we spend a lot of time talking about where the information in the textbook actually comes from and what differences of opinion there are among scholars on certain issues.

Current event students should know more about and why?

Ideally, I'd love for my students to be well-informed about all kinds of current events! More than being knowledgeable about any single event, though, I want them to be politically aware and engaged, and to get out and vote.

In my course on the history of women in the ancient world, we usually start out by discussing modern feminist movements, and students are often surprised to learn that women's suffrage in the US came about less than a century ago. It's easy to take these rights for granted and to be cynical about our political system, so I always want to see more students walking around with their little "I voted!" stickers on, taking part in the political process.

What was the best meal you’ve ever had? Why?

If you could live in any other time, when might that be? Why?

Students ask me this fairly often, and I think they always expect me to say that I would go back to ancient Egypt to meet Cleopatra or to see the pyramids being built. In fact, going back to the time period I study doesn't actually hold much appeal!

It's such a cliché, but I'd really like to experience Paris in the 1920s. Maybe also early modern England to see Shakespeare's plays performed for the first time. Oh, and imperial Rome to hang out at some wealthy senator's country villa.

I'd only go back in time if I could choose my circumstances, though; I'd hate to land in the middle of a war, or to see the ancient world from the vantage-point of the cabbage field I was stuck weeding.