Twenty-three students and alumni from the University of Louisville – 16 from the College of Arts & Sciences – earned some of the world’s most prestigious scholarships in 2016. The scholars will head to destinations throughout Europe, Africa, Asia and the Middle East. 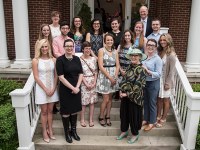 Twenty-three students and alumni from the University of Louisville – 16 from the College of Arts & Sciences – earned some of the world’s most prestigious scholarships in 2016. The scholars will head to destinations throughout Europe, Africa, Asia and the Middle East.

Many award winners credit faculty mentors from across A&S for their achievements. Truman Scholar Hannah Wilson (Political Science, Women’s & Gender Studies, and Philosophy) noted that faculty from Philosophy, English, and Political Science were instrumental in her accomplishment.

“Undoubtedly, much of my success is credited to these amazing people and others too numerous to name individually,” Wilson said

“I am so proud of the accomplishments of our students and of the time and expertise so many of our faculty shared in mentoring them,” said A&S Dean Kimberly Kempf-Leonard. “All of our award-winning students embody the ideals of a liberal arts education, and their success demonstrates the relevance of a degree in the arts and sciences in today’s diverse and rapidly changing world.”

Patricia Condon, who heads the national and international scholarship program, said there were originally 30 Fulbright candidates for 2016. Of those, 22 were selected by the U.S. selection committee and recommended to various countries—a high success rate that earned UofL recognition from Fulbright award organizers.

Besides the 15 who were ultimately selected for the award, two were declined and three were chosen as alternates.

Those receiving U.S. Student Fulbright Awards from the College of Arts & Sciences are:

Other Fulbright winners include:

Six students from the College of Arts & Sciences were selected as Critical Language Scholars, including Brawner, who is also a Fulbright. They are:

The university previously announced that A&S students Hannah Wilson, who won Kentucky’s only Truman Scholarship, Conrad Smart, who won a Goldwater Scholarship, and Brandt Coleman, who won a Congress-Bundestag Youth Exchange for Young Professionals, were also the recipients of prestigious national awards.

“We repeatedly talk about our goal to be a premier, nationally recognized, metropolitan research institution and these results make it clear that we are achieving that goal,” said UofL President James Ramsey. “Our prestigious scholar program is a point of pride that showcases UofL’s many opportunities for student global engagement.”