I think, therefore I DIVE IN

Meet Liberal Studies Director John Hale. Prof. Hale, director of Liberal Studies and professor of archaeology, not only uses a textbook to instruct students about ancient times in the classroom – he shows them how to get their hands dirty in the discovery of the past at field sites in Greece and Portugal. 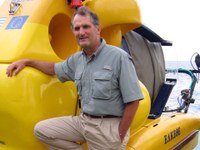 Prof. Hale, director of Liberal Studies and professor of archaeology, not only uses a textbook to instruct students about ancient times in the classroom – he shows them how to get their hands dirty in the discovery of the past at field sites in Greece and Portugal.

In this Q&A, we learn what Prof. Hale has in common with Titanic director James Cameron and why even though he doesn’t want to go back in time, he can appreciate the art of an ancient meal.

What is the focus of your current research? Archaeology of underwater sites; ancient shipwrecks and naval technology; archaeology of sacred sites; Greek and Persian Wars; interdisciplinary approaches to unsolved mysteries of the past.

What are the goals you most want to accomplish in your work? Not so much the goals that are in your job description, but the goals you hold personally? Continue to investigate ancient sites on land and under water, especially in the Mediterranean region, that help us understand ancient peoples and the clashes of civilizations that gave rise to the modern world.

Current event students should know more about and why? An interdisciplinary project about the origins of the Delphic Oracle site in Greece, which brought together specialists in geology, archaeology, chemistry, and toxicology, to show that everything the ancient Greeks had written about natural emissions of intoxicating vapors at Delphi was absolutely true.

What was the best meal you’ve ever had? Why? Leaving aside Mom's cooking, the best meal I've ever had was prepared by a shepherd and his wife in the remote Portuguese countryside, in a stone hut with a thatched roof that had no electricity, no gas, no artificial light or any contact with the outside world.

The meal consisted of home-made bread, sheep's milk cheese, a handful of olives, a chunk of pork sausage that had cured in the chimney of the hut the previous winter, a pear from a nearby tree, and red wine that had been cooled by sinking the bottle into a spring outside the house. I felt that I had dropped through a hole in time back into the lost world of the past, and that my two hosts might have offered the same meal to Abraham or Odysseus.