Kaht is working in a group studying how a remote sensor that can detect electrochemically-active species in water, such as metals (i.e., arsenic and lead) and pharmaceuticals (i.e., estrogens and antibiotics). 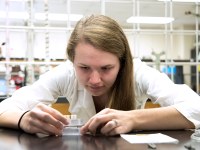 Current Research:
Our group is working on a remote sensor that can detect electrochemically-active species in water, such as metals (i.e., arsenic and lead) and pharmaceuticals (i.e., estrogens and antibiotics). The idea is that the sensor can be placed out in the environment near a water source, such as the Ohio River, and the concentrations of species in the water can be determined autonomously by activating the sensor from the laboratory. Therefore, traveling to the sample site, which is the current method for analysis, is no longer necessary.

The basic concept of the sensor relies on using electrochemistry. First, a specific potential is applied to an electrode within the water sample. This will promote a select group of analytes in the sample to be deposited onto the electrode surface. Then, a different potential is applied to strip the analytes away from the electrode surface. This stripping process produces some current. The current produced is then related to the concentration of the analyte by using Faraday's law, Q=nFN. Therefore, we can use the sensor to determine the concentration of select compounds in a sample.

What inspired you to research estrogen levels in the water supply, and why is this research for value academically and to the public?
Although I am not yet working on the estrogen research, I plan to pursue this topic for part of my dissertation. A few years ago, I read about a study that showed that some wild fish populations are being sterilized. The researchers concluded that there is a chain of events that is causing this sterilization. They found that women who are taking birth control excrete artificial hormones that ultimately end up in the waterways. These hormones, such as estrogen, have been linked to the sterilization of these fish populations. I found this very intriguing.

From an academic standpoint, it would be very beneficial to know the true levels of these hormones in the water supply. If we knew the levels of the hormones, we could take action to treat this issue before it hurts aquatic wildlife.

For the public, it is important for everyone, scientist or not, to understand their impact on Earth and how it will affect future generations. We can see the effect of automobiles on the environment and that is why some people have made changes to adapt to electric cars. They adapted because of the research that found that cars are producing toxic compounds to our atmosphere. This concept may be similar to findings obtained from estrogen research. We may find that hormone levels are high in the water and that fish populations are indeed being sterilized and that change needs to be made before there are no more fish. This could encourage people to make a change in their personal lives or promote companies to develop hormone-specific water filtration systems.

When did you know you wanted to be a chemist and scientist? Why did you make that choice?
I have always been intrigued by science. I grew up hoping for a CSI Investigator Kit for Christmas and I loved doing at-home science experiments with my parents on rainy days when we stuck inside. As I went through high school, I found that I greatly enjoyed chemistry lab and physics lab. Going into college, I chose to double major in biology and chemistry with the intention of pursuing pharmacy school or medical school. Even though I found pharmacy and medicine intriguing, I discovered that I liked something more - research.

I began a research project in chemistry at the end of my sophomore year and I continued on that project until I graduated two years later. Working on this project was my defining moment. I knew that I wanted to be scientist from that point on. I loved the challenges associated with research and the ongoing mission to solve the unknown. And although I have favored chemistry, I typically straddle the border between chemistry and biology in my research as I am drawn to environmental science.

I feel strongly that each person should find something that makes them truly happy and that they should pursue it, regardless of salary, location, fame, anything. That is why I chose research - it is something that makes me happy. It was a hard choice at first actually, because a PhD comes with much less fame than a PharmD or MD (despite us all having title of doctor) and that was hard to accept. I wanted to be re-affirmed that my choice was great, but I had more people unsure of what a PhD was as opposed to those who were excited. Despite other's opinions, I stuck to what I love and I began at Louisville to get my PhD and I could not be happier with my choice.

Do you have any key mentors? Tell me about them.
Absolutely. Top on the list is Dr. William Wetzel, my undergraduate chemistry research adviser. I would not be here today without him. I worked under his supervision on my research project in undergrad for two years but I knew him for all four years of college as a professor and adviser to the chemistry club. He helped guide me in the right direction - not by pushing me one way or another, but by being supportive as I discovered my interests. I am still in contact with him and I plan to stay in contact for a long time because he is so helpful, offers such guidance, and is just all-around a great person and scientist.

Another critical mentor is my current adviser, Dr. Richard Baldwin. Working toward a PhD means doing something in research that no one has done before, which is much easier said than done. As I go through this journey, he is there to offer helpful advice but he also serves as a tough critic, which ultimately helps me build skills needed for life beyond my schooling.

I also have such great mentors in my family too. My mom, Karen, has always been encouraging of my interests in science, from assisting on math homework to giving advice on science fair projects. My sister, Kristen, is a great life mentor because she makes sure that I remain genuine and "real". Lastly, my husband, Dagan, serves as a mentor to keep me motivated and going when I hit speed bumps in research and in life.

What is the last non-required book you read? What made you pick it up?
It has been awhile since I have had time to read something other than research articles. Actually the last book I read was Fifty Shades of Grey, as embarrassing as that is to admit. I mainly decided to read it to see what everyone was talking about because it was the topic of many conversations.

On my list of books to read next though is "Periodic Tales: A Cultural History of the Elements, from As to Zn" by Hugh Aldersey-Williams, "The Choice" by Nicholas Sparks, and "Science Matters" by R. M. Hazen.

Advice for girls who would like to enter the male-dominated world of scientific research?
Even though females in science are still considered a minority, there is nothing to be intimidated about. We are just as capable as anyone else. My advice: show the world the best work that you can do and be proud of yourself. Don't let anyone tell you that you do not belong here.

P. S. I have found that finding female friends in science is tricky (simply because there are not many of us). Good luck!

Most revolutionary discovery in chemistry? Why?
This is a tough choice, but I would have to say that Marie Curie has made revolutionary discoveries that have had a great impact in chemistry. She developed the theory of radioactivity, discovered two elements, and she performed techniques for isolating radioactive isotopes. Her work led to the first studies into treating neoplasms (abnormal tissue growths that lead to tumors). She was the first woman to win a Nobel Prize and the only woman to win two Nobel prizes. I think she is the most revolutionary because she pioneered such unique work that led to further discoveries by other scientists. She is also a wonderful role model for women in science. 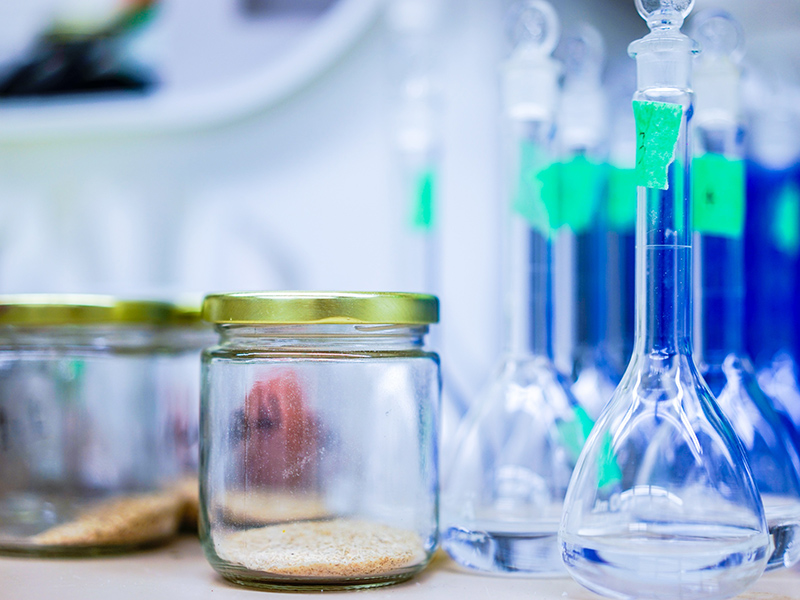 Find out more about the Department of Chemistry in the College of Arts and Sciences.