Shadea is a cultural anthropology major and recently won a Fulbright Scholarship to teach English in Amman, Jordan. 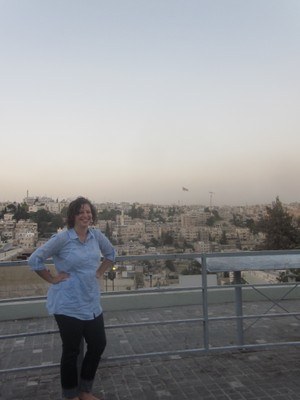 Over the past two weeks there's been quite a bit of rumbling in Egypt with crowds gathering in Cairo and other cities.  I fell like I've been talking politics with everyone from roommates to taxi drivers to my advisor at school.  Here in Amman, my friends are ecstatic because today the ruling party announced that they would prefer Housni Mubarak to step down and the military officially threw their support behind what's being called a people's revolution.  Headlines are tentatively suggesting that tonight is the last night for "The Pharaoh".  Coincidentally, a concert was scheduled this evening in Jebal Webdeh, an area of town that serves as a cultural center, with Danish and Jordanian musicians.  Needless to say, the gathering was used as an excuse to celebrate.  It's easy to see how people are inspired by the bravery and perseverance of the demonstrators in Tahrir Square.  There was plenty of talk about what's next for our neighbors in Egypt and it will be interesting to see what happens next.