I began my academic career at U of L with the intention to study communication, an effort I hoped would result in the fruitful field of motivational research. Never in my wildest dreams would I have imagined myself minding my footing in a square meter space, with a pick-ax and dust pan in hand, carefully excavating early Upper and Middle Paleolithic levels under a gnat-infested limestone roof... Such was the scenario I found myself in this past summer, when working in Portugal under Dr. Jonathan Haws along with a team of undergraduate and graduate students from University of Louisville, University of North Carolina and University of West Bohemia in Czech Republic.

Thanks to the University of Louisville, Dr. Jonathan Haws and the Hick's award, I participated in my first archaeological field season at Lapa do Picareiro, a cave site situated near the town of Fatima, an opportunity very hard to come across as an undergraduate. As a result of this trip, I had to opportunity to expand my knowledge of faunal osteology and excavation methods and techniques as well as experiencing first-hand the dilemmas and rewards that accompany the practice of archaeology. As an aspiring zooarchaeologist, such experiences are priceless. Working in Portugal awarded a holistic introduction to working in the field as an archaeologist, as well as a reaffirmation that this is the field for me. Upon my return, my experiences in Portugal have created a series of opportunities for undergraduate research, an asset that will surely aid in my pursuit for graduate school. A second benefit of participating in an archaeology project abroad was the experience of working in a foreign country. As a Brazilian who emigrated to the United States in the late 90s, I deem the opportunity to work in Portugal, the land of my ancestors, and chance to learn a different dialect of Portuguese, as truly unforgettable. Although the work was rigorous, physically demanding at times, I would not trade my experience for anything in this world, and anxiously await the next opportunity to do field work abroad. 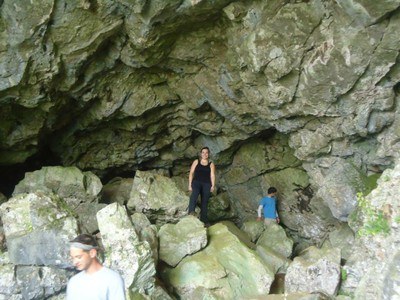 Milena (top center) in a cave in Lapa do Picareiro, Portugal. 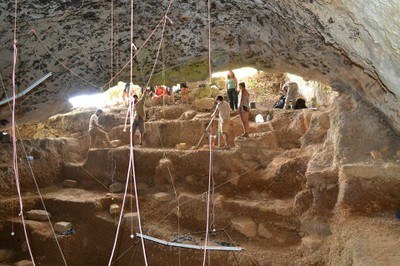 Milena and crew on site in Portugal.