Jacob reflects on his visit to AAPA conference in Calgary 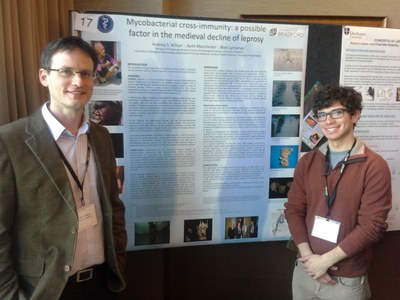 I attended the 83rd annual American Association of Physical Anthropology conference in Calgary, Alberta Canada. I presented a poster on the research I’ve conducted with Dr. Fabian Crespo during the Undergraduate Research Symposium on April 9, 2014. My project is revisiting the cross immunity hypothesis between the pathogenic agents that cause tuberculosis and leprosy by developing in vitro protocols. Cross immunity between these diseases was originally suggested as an attempt to explain why endemic leprosy decreased as the frequency of tuberculosis increased during Medieval Europe. In the lab, we measure cells’ cytokine production when they are exposed to tuberculosis or leprosy lysates to monitor any potential shift in the immune response when the cells are exposed to both tuberculosis and leprosy at sequential times. Our preliminary data show there may be some immunological shift when exposed to both tuberculosis and leprosy, however we are advocating for more social factors that may have mimicked cross immunity, for example if people with leprosy were shunned in society then it would not be able to spread. The aim of the project is to collaborate with archaeologists working in paleopathology to link experimental immunology with the lesions that diseases leave on the bio-archaeological record. At the conference I met many well-recognized paleopathologists, such as Dr. Charlotte Roberts and Dr. Sharon Dewitte, who we will be collaborating with in the future.