David is currently pursuing a M.A. degree in Anthropology at UofL. 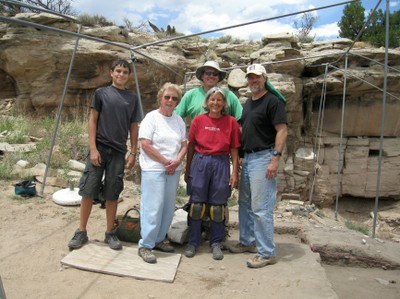 He recently completed his sixth season at Ghost Ranch, New Mexico, where he is working with archaeological field crews at two hunter-gatherer rock-shelter sites, GR-2 and GR-145, located three miles apart on ranch property.  The contrasting patterns of the faunal assemblages at the two sites will form the basis for Hoefer's master's thesis, which he is pursuing under the guidance of Dr. Jonathan Haws.

"This year's finds support the continuing impression we have that the two sites were used for different purposes," says Hoefer.  "Once again, we found lithics and ceramics but almost no animal remains at GR-2.  And, once again, GR-145 produced bone counts in the hundreds."  In addition to digging, Hoefer collected soil samples for chemical analysis and arranged for new radiocarbon dates at both sites.  "One factor we still need to control for, is time-depth," says Hoefer.  "The greater the chronological overlap, the less important time becomes as a variable in preservational difference."  (David Hoefer at far right.) 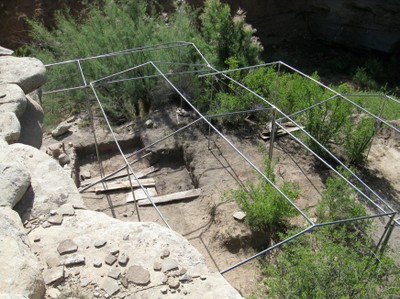 GR-145 is a rock-shelter site in a high-energy stream channel.  This shot is from atop the bench, immediately to the north.