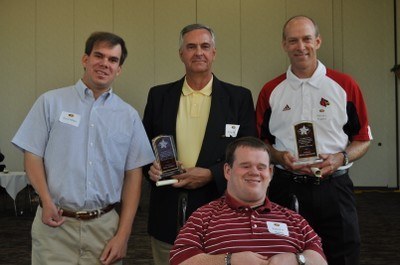 Two fathers recently were honored as University of Louisville Parents of the Year for helping their sons overcome adversity so they could attend and succeed in college.

The award, now in its third year, is designed to let students recognize their parents for the help and support they've given throughout the students' lives.

This year's recipients were Patrick John Hughes and Greg Cribbet. Each father received a plaque and a copy of his son's letter at a ceremony Homecoming day at the Student Activities Center.

Later that day, Patrick John Hughes was on the football field, pushing his son's wheelchair as part of the UofL Marching Band. Son Patrick Henry also is blind. His father pushing his chair is one way the accomplished musician can be in the band; the elder Hughes also attends class with Patrick Henry each day to help him with visual cues.

Wrote Patrick Henry in his nomination letter: "People are always saying they admire him for the 'sacrifices' he makes, but he will tell them what he does is not a sacrifice but a blessing to be able to spend so much time with his sons. Despite what he may say, I believe what he does is a sacrifice."

"Obviously, I'm honored that my son would take the time to nominate me for this award," Patrick John said at the ceremony. "It's an honor to be here today with these other families."

The father said he enjoys his second-go-around at college with Patrick Henry and that he might be learning more attending class with his son than he did as a student.

"He's being the kind of student I wish I would have been," Patrick John said.

In the short history of the Parent of the Year award, this is the first time that two awards were given. Tim Cribbet nominated his father, Greg, for being his longtime champion. In his nomination letter, Tim explained that he was born three months premature and suffered a brain injury. Doctors told his parents that he had a 5 percent chance of survival. "Anyone facing those overwhelming challenges must have someone in their corner that will fight for their life. Fortunately for me, that someone is my father," Tim wrote.

Greg made sure that his son had access to everything he needed to succeed — such as special water therapy classes — and spent every hour possible helping him learn to walk. When Tim started elementary school, Greg encouraged and supported his efforts to play golf. When Tim wanted to manage his high school's football team, Greg transported him to every game and practice.

Since Greg retired nine years ago, he has made his son's education his first priority. Recently, the family relocated from Columbus, Ohio, so Tim could finish a degree in sport administration at UofL. "He has been a source of physical and mental motivation, a tireless advocate, sacrificed hours of his retirement and his life to invest in 'my' future, and all with an unconditional love that defies mere explanation," Tim wrote. Greg said at the award presentation that Tim has been an inspiration to him. His son, he said, is driven to get an education, and because of that drive, he has done everything he can to help. "You want your child to have every opportunity," Greg said. "That's the job of the parent."

Student Affairs received more than 40 nominations this year for Parent of the Year. Many of those nominated attended the ceremony alongside their children. Each nominee received a rolled scroll that included his or her child's nomination letter. Dean of Students Michael Mardis read excerpts from some of the letters that highlighted parents' accomplishments.